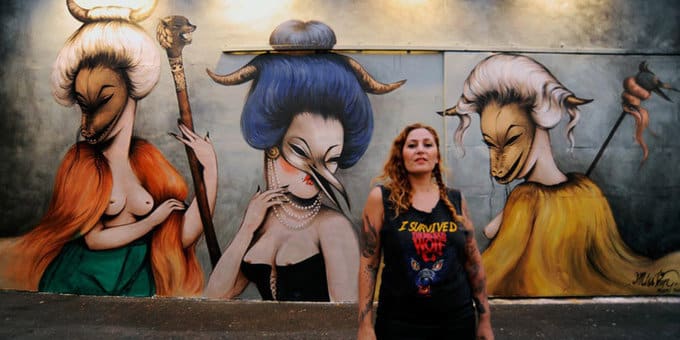 Women have been integral to the world of art for centuries. As innovators in artistic expression and the source of inspiration, it makes one wonder why despite outnumbering men at art school, remain underrepresented in the industry.

The numbers don’t lie. In 2016, according to the Universities and Colleges Admissions Services, 63% of undergraduates studying creative arts and design were female. However, only 29% of the artists represented by London’s prominent galleries were women. In 2014, a mere 7% of the artists on view in the Museum of Modern Arts collection galleries were female. And in 2013, only 24% of museum directors were women; making 71 cents for every dollar that their male counterparts made despite these galleries’ $15 million budgets. It should also be mentioned that in 2013, not a single artist in the top 100 auction sales was female.

Why are women in art underrepresented and misinterpreted?

Perhaps it has to do with the fact that society still segregates women from men by referring to them as “female artists.” The divide is created when art created is categorized by gender. Why can’t an artist just be an artist? Or maybe it’s because little has been done to address the gender imbalance in female representation in the press, galleries, permanent collection, and museum exhibitions.

Mostly, the sad truth is that the belief that women are inferior artists still exists in the minds of many who make the major decisions. Could Hans Hoffman’s “This is so good you wouldn’t know it was done by a women” sentiment on a painting by mid-20th-century painter Lee Krasner, still be the same type of attitude that many influential men in the art world have towards artwork they discover was created by a female artist? However, as the conversation revolving the underrepresentation and misinterpretation of women in art continues, there are many who are determined to change the narrative and put a spotlight on female artists.

The Minneapolis Institute of Art and Denver Art Museum would spark the comeback of women-only group shows which according to the New York Times “fell out of favor in the 1980’s and ‘90’s,” and the unknown female artists of the mid-twentieth-century art movement. Galleries and museums have started to feature women-themes exhibits as they try to resuscitate the careers of neglected artists.

The DKNY fashion house would approach The New Museum in New York to underwrite 2016 spring season which was devoted to five solo exhibition by female artists entitled “The New Women’s Project.” And according to The Freeland Foundation report, representation in the Turner Prize has improved to 44% over the last ten years with 31-year old Helen Marten winning the award in 2016. In addition, 2017 British Pavilion in Venice Biennale has been garnered by 73-year-old Phyllida Barlow’s powerful installation “Folly,” a long time neglected and under assumed British artist with no gallery representation until this year.

In this video, ‘Girls’ actress Jemima Kirke addresses the topic of women in art (or the lack them). She looks at the changing role of female artists in a male dominated art world over the centuries – and how some of them eventually took on the establishment in the 1970s.

It seems that there have been some improvements despite women outnumbering men in art school and the fact that they remain under-represented in all of the metrics that measure career achievement. By changing the context, women can take back the power and allow their stories to be told on their terms.

In fact, many female artists don’t mind being labeled as “women artists” at all, arguing that the separation may actually help rather than hurt. Such is the case with 122-year-old non-profit New York gallery, Pen and Brush, who concluded that “showing work by women exclusively is a way to get right at the heart of the stereotype that there’s just not enough good work by women. People come into our gallery where there is no obvious indication that all the work is by women. They read the information cards. They’re surprised. They buy.”