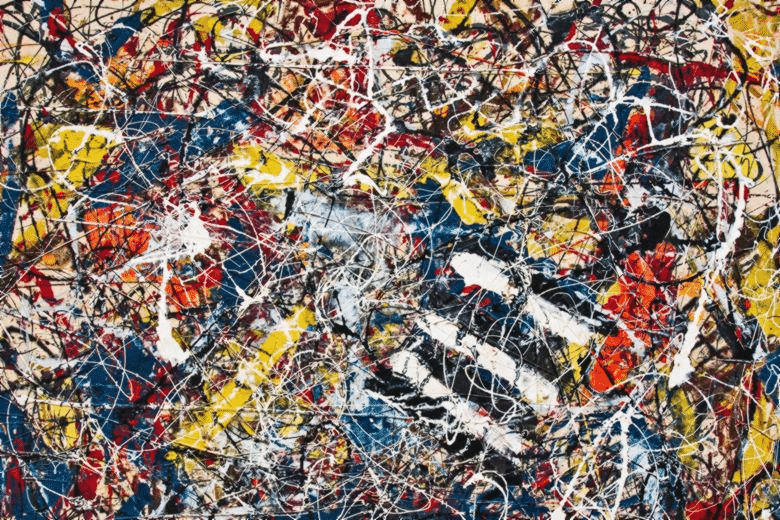 What would you do with $500 million? (We’re talking record-setting-Powerball money here.) Perhaps, pay off your student loans, buy a home, and take a really fabulous vacation—but that’s peanuts to $500 million. For that kind of money, you could buy this 28-bedroom medieval castle outside of Paris—10 times over. You could buy a hundred Koenigsegg CCXR Trevitas—the most expensive car in the world. You could buy half a dozen Boeing 757s for your personal use.

Ken Griffin has that (and then some) to spend. Last fall, he actually shelled out $500 million. For a mansion? A mega-yacht? A small country? No— for 2 paintings, one by Jackson Pollack (entitled, Number 17A, artwork image above) and one by Willem de Kooning (entitled, Interchanged, artwork image below). It set records± the previous most expensive deal was the Qatar Museum’s purchase of a Gauguin piece for $300 million. This isn’t Griffin’s only wildly expensive art purchase, either. He purchased a Gerhard Richter piece for $46 million a year ago.

At the end of the day, those are pieces of canvas with paint on them. But to him, they’re worth $500 million. And it’s not unusual for collectors and museums to pay millions of dollars for a single piece. So why is art so expensive? A Picture’s Worth A Thousand… Dollars?

How do we determine the value of art? That’s a tough one. The prices of things we buy every day are determined by market forces—what those things cost to make and what we’re willing to pay for them. The price of an apple, for example, has to be higher than what it costs to grow, market, and distribute it (or companies wouldn’t do it) but low enough that we’re willing to pay. Of course, apples are a commodity—we need food to eat and we’re going to buy a lot of apples every year.

We don’t technically need to have art on our walls—it’s a “luxury” good. So, the pricing process is a little different. But other luxury goods are generally still subject to some market forces. The price of that Koenigsegg CCXR Trevita, for example, has to do with the cost of the development, production, marketing, and distribution of the car. It also has to do with the intangible value of owning something so prestigious—only 2 were ever made.

These goods are aimed at people for whom the price is literally no object, but even those people will put their foot down eventually and decide that it’s not worth the price. Luxury goods, in other words, are priced more according to what someone is willing to pay for them than what they actually cost to produce or the actual value they add to someone’s life. The rarer and more prestigious the product, the more people seem to be willing to pay for it.

However, that doesn’t necessarily explain the price of art. Yes, it’s rare—many pieces are completely unique. If the artist is dead, the piece is even more unique, since that artist will never again produce more work. There aren’t going to be any more Leonardo Da Vinci paintings, so they’re especially valuable. But how valuable? How do we assign a dollar value to a work of art? Art doesn’t have a clear and present base value. You can’t eat it or use it as shelter. In a pinch, you could theoretically burn some of it to keep warm, but that’s not worth much. The price of a piece of art is essentially based on what people agree it’s worth. The market says Jackson Pollacks are particularly valuable, so the price of a Jackson Pollack painting skyrockets. That’s it. There’s no doubt that those works are valuable – people love them and they’re powerful and interesting. At the same time, how do we put a dollar value on it? There’s no intrinsic characteristic of a painting or sculpture that’s worth $500 million, other than that someone is willing to pay $500 million for it.

What makes them willing to pay so much? A couple of things. First, it’s an investment. If you’re spending a few hundred dollars on a piece, chances are it’s because you love it and want to look at it. The art market is highly speculative—it’s typically not a good idea to bet your life savings on the hope that you’ve discovered the next big artist and you’ll be able to sell for a huge profit. At the $500 million level, however, things are different. You’ve increased the value of that piece by spending so much on it and the next person who wants it will expect to pay more. That De Kooning piece Griffin bought: It cost him $300 million, but it was last purchased for $20.7 million in 1989. That’s a pretty serious profit and a good way for the uber-rich to invest.

In addition to being a good investment, paying a sky-high price for a prestigious work of art gives you some cultural cache. Your name is in the paper not as a hedge fund manager or real estate mogul, but as an art collector. It’s just a cool thing to do.

Of course, most of us will never spend $500 million on anything, let alone on art. We’ll buy the artworks we love, simply because we love them. Just remember that the value of art is what you’re willing to pay—don’t let the price tag fool you.

One thought on “Why Is Art So Expensive?”