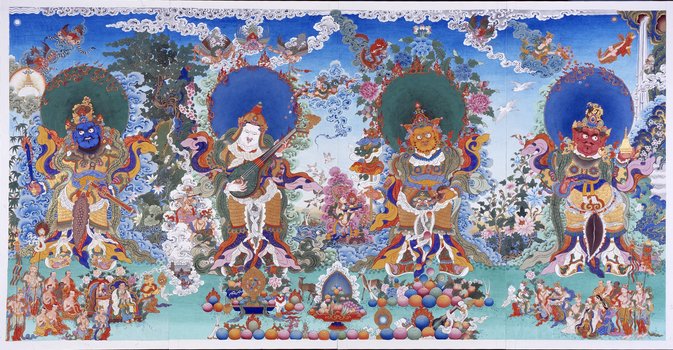 Practiced throughout Asia, Egypt, and Europe from ancient era to high Renaissance time, the alchemy aspired philosophical and protoscientific culture had influenced everything from turning lead into gold, to creating an elixir for immortality for emperors. Just the word alchemy conjures up images of ancient pots of peculiar boiling liquids. But beyond the quests to convert one substance into another, practice of alchemy sought to transform and bend nature at will with alchemy holding the key that unlocked the secrets of creation.

Artists, like alchemists, are fascinated by the mystery of transformations which were to some extent was by their multifarious design in creative convergence. And without the mysterious art and the alchemical trials, we wouldn’t have the chemical baths used in photography, the metal alloys and composites used for sculptures, and ever-so-present pigments and oil paints. But beyond the art inventions that were born from alchemical laboratories, we see the influence of alchemy in the artworks themselves. Through different ideas and themes, alchemy would appear in visual arts through genre, religious, and mythological images. With modern artists identifying themselves as esoteric thinkers, their artwork focused on the alternative spiritualities explored by the ancient alchemists. And we will find in the historical nature of alchemy that it holds a spiritual role in the esoteric traditions.

Written by German alchemist, Johann Becher, the 1738 edition of Physica subterranea has a fascinating illustration titled The Body as an Alchemical Laboratory. Depicting a figure surrounded by floating objects, it shows symbols related to Venus and Mercury, and only through trained alchemist eyes will these images reveal themselves to be linked to copper and quicksilver. Illustrations such as these further emphasize the mystical and occultist nature of alchemy with its secret codes and enigmatic symbols. To this day, art inspired by alchemy and esoteric practices exist.

Drawing inspiration from religion, sacred geometry, astronomy, and alchemy, American painter, Timothy Ely creates handmade books. His 1995 book, Materia “consists of alchemical images intrinsic to the transformation of matter. The transformation is slow, gentle, and non-corrosive. Inks were made by gently caramelizing certain carbon-based materials such as seaweed, so as to pay homage to the subtle arts of the East, and wood, to recognize with reverence the tradition of the wooden board binding. As in the alchemical tradition, the formulation and process is occluded and, as it requires much patience to generate a full spectrum ink that reads as black, few others are likely to replicate the experiments.”

Seen in just about any occult book, David Chaim Smith’s Tree of Life diagram is certainly not the only representation of his work inspired by alchemy and the ancient, esoteric Hebrew system of the Kabbalah. His 2012 The Sacrificial Universe “draws upon his experience to present us with a devotional approach to ecstatic visionary mysticism. Ranging from intellectual treatises on sacred geometry, biomorphism and the symbol of the serpent in kabbalistic theory and practice, to a poetic twilight language of ecstatic devotion.” Named one of the “Top Contemporary Surrealists” by Art and Antiques Magazine, New York-based artist, Madeline von Foerster, is inspired by surrealism, alchemy, and folklore. Von Foerster describes how her painting Essentia Exaltara “comes out of my love for alchemical texts and illustrations. The alchemists of old inspire me greatly with their metaphoric language and their endless quest for knowledge! While the alchemists were obsessed with the distillation and transmutation of inorganic elements, I imagined that a non-biological being might be just as interested with our animal parts and their elusive workings. In a way, the transforming of lead into gold is no more magical and impressive than the operations of the human heart.”

These artworks centered on alchemy were once perceived as rather disturbing, blasphemous even. But today, through intra-disciplinary nature of art, literature, music, TV and movies, and popular and broad cultural fascination with the supernatural (Edward Cullen, Wolverine anyone?), mythical creatures, and cross-cultural and multi-religious spiritual exploration, curiosity surrounding these types of artwork has piqued. Naturally, many people may not even realize the real extent that they have been captivated by the allure of esotericism all the way along.