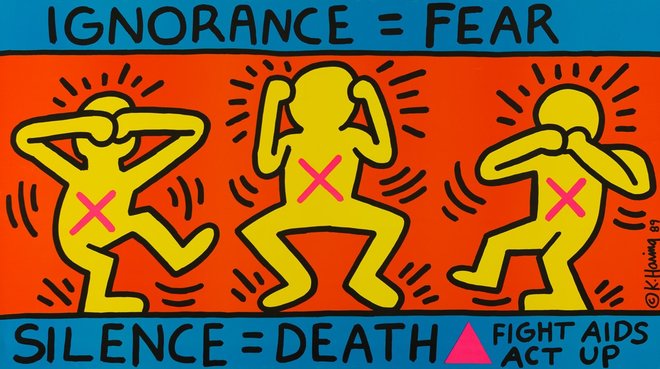 If you didn’t already know his name, no doubt you know his art. Keith Haring’s iconic work has endured through the decades. Twenty-eight years after Haring’s death, his work and its lessons are as relevant as ever.

Earlier this year, 99 Cents Fine Art in New York exhibited a recovered section of Haring’s 300-foot-long 1984 mural – Untitled (FDR NY). The portion features iconic elements of his work – breakdancing people, a figure with TV set as a head, and a barking dog. Instead of being displayed in a gallery, it’s on view to the public in a Chinatown storefront, honoring his desire to make art accessible to the masses.

From March to June of this year, The Albertina Museum in Vienna dedicates a comprehensive exhibition, “Keith Haring – The Alphabet,” celebrating the enduring influence of Haring’s art on generations of artists.

From the Suburbs to the Subway

Born in 1958, Keith Haring was born in Reading, Pittsburgh. Between 1976 and 1978, he studied commercial art at Pittsburgh’s Ivy School of Professional Art and quit once he lost interest. When Haring was 20 years old, he moved to New York City on a scholarship at the School of Visual Arts (SVA) to study painting. However, he was expelled after he and Jean-Michel Basquiat used the schools interior for a graffiti art project.

The incident in school indeed wouldn’t be the last time Haring would find himself breaking the law for the sake of his art. In fact, he was arrested and frequently ticketed for vandalizing the subway. Haring quipped how often he would walk into the police station handcuffed and to the dismay of the arresting officer, be approached by other cops who were fans of his work and wanted to shake his hand.

But while Haring’s work would “debut” in the New York subway system, his style would become so distinguishable that it caught the attention of the art world. From his white chalk drawings on unused advertisement backboards in the subway to his “Radiant Baby” symbol to his distinct interconnecting images, Haring’s work would go from the streets to galleries and museums across the globe — from the San Paulo Bienal to the Venice Biennale to Musée d’Art Contemporain de Bordeaux in France. And in 1986, he even painted a 300-foot mural on the Berlin Wall.

Openly gay and having lived through the darkest time of AIDS crisis, Haring was an advocate for safe sex. Sadly, he could not escape AIDS and was diagnosed in 1988. Keith Haring was just 31 years old when he passed away. But despite his short life, Haring left a profound mark in the contemporary art world.

“…I know my days are numbered. This is why my activities and projects are so important now to do as much as possible as quickly as possible. I’m sure that what will live on after I die is important enough to make sacrifices of my personal luxury and leisure time. Work is all I have and art is more important than life.”

His uniquely symbolic art is seemingly unsophisticated with its simple lines that almost resemble Aztec imagery or ancient Peruvian geoglyphs. They convey a message so philosophical that its energy is felt today. They were much more than dancing figures, barking dogs, and radiating babies. In fact, Keith Haring was more than an artist; he was a dedicated activist and philanthropist who used his art as tools to raise awareness on important social issues.

His legacy continues to live on in his art, and through the Keith Haring Foundation, he founded a year before his death. The foundation sustains and protects his work and his ideals, as well as supporting AIDS research and education, according to his wishes.